Every since the week that I placed my faith in the Lord Jesus as my Savior and Lord, I have been involved intimately with Christian Missions and Ministries. For forty plus years my wife and I have supported missionaries. After walking with the Lord about five years we began supporting a local Christian radio network in addition to the three or four missionaries we were supporting on a regular basis. We are still supporting two missionary families that we began supporting almost forty  years ago.

From time to time we will post on this webpage information on a ministry, or a missionary, or a Christ centered work for your consideration as a prayer warrior, or a contributor to their work.

It is my great pleasure to introduce the visitors to this website to a Missionary family that have become very dear to my heart. The Lambert Clan Missionaries to Mexico. I will have more personal information for you in the coming days and weeks. 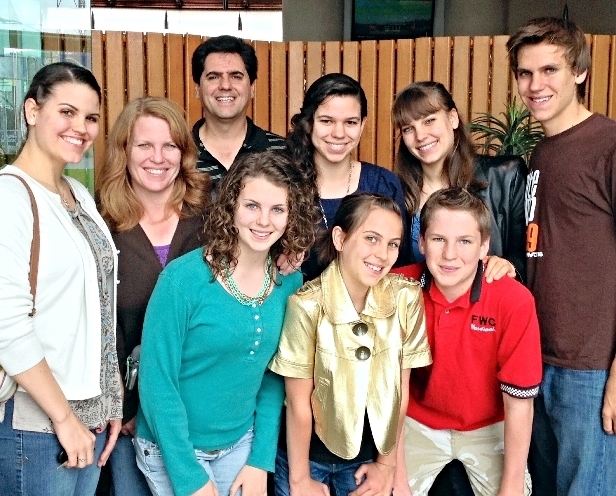 Let me introduce you to the Lambert Clan:

Even though I attended church with my family while growing up, I did not understand the personal need for a Savior. It was in 1971, after my father -in-law died, that I realized I had no spiritual leader in my life. I began thinking about such things as: were I to suddenly die, where would I be buried, who would preach at my funeral, where would my spirit go? As I began searching for some answers, I turned to friends and through them began attending a local Baptist Church. In a short while, I realized I was a sinner and that I needed to ask forgiveness for my sins and I needed to ask Jesus to be my personal Savior. One day, soon after coming to this realization, while my children were napping I got down on my knees and confessed my sins and sinfulness to God and asked Jesus into my heart. I will never forget the peace that suddenly prevailed within me.
Since my husband, Tom, was not a church attendee at all, (he professed to be an atheist), I continued taking the children and going alone to a local Baptist Church. One day Tom asked me what I thought of him going with me and the boys to church. Thrilled that he was showing any interest in church, I told him that would be wonderful. So, we as a family attended a church the next Sunday morning where there was a Missions conference going on. My husband was so taken with the service that we went back on Sunday night. The sermon that night so convicted him of his need for Christ that he asked Jesus into his life. Then as a family, we began attending church ever Sunday and any service that was available during the week. Beginning with that Missions conference, we were introduced to missionaries from several organizations and we learned that they were real people with real needs. As we became friends with some of these people, we began to pray for them and to help financially support them. About two years after we started attending the first church, we were lead of the Lord to change to a church through which we were able to get our sons into Christian school. We immediately became very involved in the missions program at the new church as well as training programs through the Christian school to help us become better parents.
Over the years it has been a blessing to follow the lives of missionary families through prayer and financial support as they fulfilled God's plan for their lives half way around the world. We became involved in bible studies for couples as well as for individuals. We tried to attend conferences and meetings that would show us how to be Godly parents, a Godly husband and wife, and Godly people. It was not always easy for us to know what God had in mind for us. But through our prayers and the prayers and counsel of Godly people the Lord has always faithfully led us.
Over the past thirty plus years we have had the opportunity to learn how to present the gospel and share from our hearts what God has done in our lives. We were privileged to run a Christian Camp for 12 years and learned more than we ever imagined through relationships with many, many believers and non- believers. After our Christian Camp ministry, we moved back into the secular world in our jobs and through owning several business. Where ever we turned we saw how many people there were who were hurting. As I listened to others problems, I realized how blessed I was and was able to share with them how God has changed my life. Tom and I have had opportunities to help others on a one to one basis as well as those that have gone thru catastrophes like Katrina and Rita. However, missions and ministries have remained very dear to our hearts thru the past thirty plus years, perhaps because that is where our real spiritual growth began.